You can read it now here

Last weekend I had a chance to share a trip to the Colombian Coffee Area with Glenn Wichman, one of the creators of the original Rogue (along with Michael Toy and Ken Arnold) and a veteran of the video games industry. 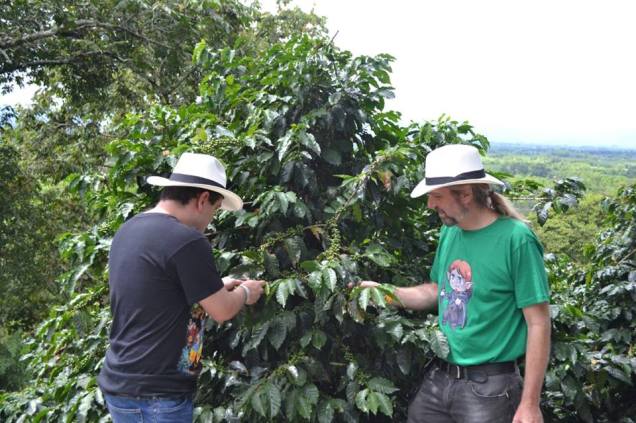 On Sunday we did this small but hopefully interesting interview, in the middle of the Colombian nature. Some of the topics we talked about are:

Check it out here! You might also want to check the previous interview I had with him, 9 years ago!

Roguelike games’ developers often concentrate on the gameplay, depth and innovative mechanics leaving something to be desired in visual aspects. This is not to say user interfaces are not improving. They are, but even quite advanced games usually do not receive tile graphics. Sometimes author can do the art himself well enough. Another possibility is to get someone else to do the hard work.

With the recent update 1.6.1, Mario Donick’s roguelike RPG “LambdaRogue” also received a new graphical tileset, which improves overall experience especially for those players who don’t stick with puristic ASCII mode. In this interview, Cecilia talks about her work.

Mario Donick: First of all, can you tell our readers some basic things about yourself, like your name, age, living place, occupation?

Cecilia Favo de Mel: Hi Mario and thanks, well, name, Cecilia Souza Santos. I am 30 years old, live in São Paulo – Brasil. My occupation is pixelartist – really, that is my full time job, though I have no fixed contract so always freelancing on small contracts.

M: Have you always been an artistic person?

C: Well yes, when I was a kid I loved to draw cars since I always loved machines, and tending to fictional machines made me draw even more until I tried organic stuff and then got my first computer with Paint on it… XD

M: When did you start creating graphics for video games?

C: Well you could say around 2000 for my own projects on rpgmaker, but by then I was into pixelart for about 10 years already, just with no application before. But professionally, or rather, for other games, around 2007.

M: RPGmaker? Do you still use this tool, or are there any games done by you available?

C: Yes I do, I use RPGMaker VX, however due to lack of time I shifted my focus to a webcomic project – still related to my game ideas and made in the exact same graphical style, once I learn how to set the blog out for webcomics it will start off and hopefully help me have more time for the game. My setting for both games and webcomic is the kingdom of Star-La the the series is Star Light Romance, got a file about the setting if you want to check 😀

M: On what game projects did you work before?

C: A lot, seriously, as I said I live off from small contracts and many times games I worked on get released and I get no notice from client, like Swords and Potions (though Mat is still a nice client and always comes back to me when he needs updates). So here are some titles:

– Beyond Beyaan – not released yet

M: Did you know about roguelikes or the roguelike scene before you worked on the LambdaRogue tiles?

C: Yes I did, mostly because of Gearhead, a mech based roguelike game which, funny enough, my dad linked me to. He knows I am insane about mechs and sci fi and god knows how he stumbled across the link to the game. I downloaded and got a feel for roguelike games, but still didn’t play too much back then neither searched for others.

M: What is your usual process when you work on a tile? Do you draw sketches before, or to you start digitally right away? Please explain a little bit about your work.

C: Well I’d say I first sketch everything on my mind, since I have a very clear imagination I can basically see (almost touch :P) what I imagine so yeah. Once I have the design in mind I imagine how it will be in pixelart and start out pixelating on ms paint. First basic outlines, then basic color separation, then shading and antialising as needed. The rest is photoshop and the only tiring part – cutting every tile into a separate png – but just because it is simple yet done a lot 🙂

M: Most roguelikes have square tiles, with same width and height. LambdaRogue, in contrast, has 20×40 tiles. Was it difficult to work with this small and irregular size?

C: Yes and no – I am used to console style rpg setup where only terrain tiles are square while character tiles or some object tiles are rectangular, so for those it didn’t affect me in anything. In fact only thing that affected me is having all terrain tiles tileable vertically as well as horizontally, because of the details I wanted to add, but in terms of effort, all fine.

M: Did you play LambdaRogue before creating the tiles, or were you able to work without playing first?

C: I did start a game just to read more on the game, know what was going on and how the tiles and characters previously looked together.

M: The tiles you created include both fantasy and sci-fi elements. What’s the idea behind this?

C: Well my favourite setting is Sci-fi;fantasy, I love the idea of having magic, swords, knights alongside robots, starships, pistols to the point most of my favourite games, anime and movies follow that including my own game projects. So when I read LambdaRogue intro and it mentioned that civilization was destroyed, but some technology was not lost my idea was a world similar to Phantasy Star IV where there was tech, but humanity was living very poorly to the point that this tech was lost and little development was made since surviving was priority. Magic I supposed was developed before, along with technology and most of the teachings could still be passed down from masters so easier to keep than gadgets.

M: The old Phantasy Star games were really great, indeed. Phantasy Star 1 was the first RPG I ever played, and I still think of it very often when I think about RPG design. Even with its simple methods and nearly no dialogue or story, PS 1 was able to create the feeling of a huge world, or even star system — I never forget when I first entered the space ship and went to that desert planet, and later on the ice planet. It also had huge dungeons, even in 3D graphics.

Anyway — are there any current RPGs which you like to play and where you can find a mixture of Sci-fi and fantasy?

C: Well most current rpgs, both console or PC and Japanese or American don’t appeal to me that much, too much going on in graphics and such, but not so much in depth, though Mass Effect was looking interesting, but I need a new video card to play it properly.

My top sci-fi-fantasy rpgs are:

M: Which tiles were most difficult — dungeon tiles, items, or creatures (such as player, monsters, NPCs)?

C: Both items and humanoid monsters, mostly because in my own setting you either face humans or animal like monsters, no zombies or medusas etc. But both were challenging in a fun way, just outside my comfort zone which is nice to shape up.

M: And what was most fun?

M: You also created new effect icons for spells and items, new character portraits, and some general UI elements. This is not game graphics itself, but part of the user interface. Did you work on interfaces for other games or software before?

C: Yes, mostly for Beyond Beyaan and lately for Combats Commander.

M: How did you ensure that users will be able to recognize the meaning of the icons?

C: Google XD And a bit of experience, I mean even as a player I look at games with the eyes of a professional in graphics department, so I use what is most common in games of the genre with some peculiar design tweaks. When it is something too new… I google and check out the first images related to that word or concept.

M: Will LambdaRogue players see more of your work in the future, in other areas of the game?

C: As long as you want my services, I am here! You are a nice client and I truly like the setting of the game and want to play it on next release. So yes!

But mostly, best assured way to catch me: (cecifavodemel AT gmail.com) – my e mail.

I think becoming unhealthily obsessed with something is a healthy behaviour for a teenager. Usually it runs its course in a year or two, leaving the person wiser, like in larval stage programmers.

That said, we all should have limitations on how long we play videogames. These limits, ideally, should be self-imposed. For minors who have not yet learned discipline, parental guidance may be needed. I am strongly opposed to the government being directly involved, however.

Check out the full interview here

See part 1 here
Thomas Biskup, developer of ADoM and JADE, has been away from the roguelike development scene for a while. He asked out sources of information to get up to date, and we recommend ASCII Dreams, Column @ Play and roguetemple as some popular blogs; there is also the Roguebasin Wiki with heaps of information. Let’s continue with the interview…
Read the full interview

So, I’d been meaning to interview our faithful leader and the founder of the Rogue Temple and Roguebasin; Slashie (Santiago Zapata). Well, I finally got around to it. I’d like to greatly thank Slashie for taking the time out of his busy workday to answer my absurdly long interview, and of course for all the hard work he’s consistently put into the Rogue Temple and Roguebasin year after year. I’ve been debating editing this together in various ways, but I think a simple presentation might be best. So, without further adieu, an interview with Slashie:   — EligZero, for Temple of The Roguelike

Check out the interview!

Mr. Thomas Biskup, founder of Quinscape and outstanding developer from the middle ages of roguelike development (the nineties), the creator of ADoM and the dreamer behind JADE, is a tough one to catch… Santiago Zapata, for Temple of The Roguelike.

Read the first part of the interview here

Temple of The Roguelike
Blog at WordPress.com.