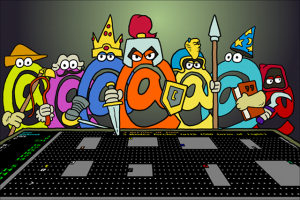 Many moons it has been since the 154 7DRLs were released, but slavering in the background have been an army of 39 reviewers desperately playing these labours of love and scribbling little notes on sheets. After this long process we have finally collated a set of reviews and scores for almost every 7DRL made this year. I present you with our glorious offering:

Some notes on using the site:

Special thanks go out to Jo Bradshaw and Xecutor who did 40 and 39 reviews respectively! Also thanks to GameHunter for doing videos of almost every 7DRL – links to specific game videos are next to the reviews.

There are a lot of real gems in here, and a huge amount of variety, showing the roguelike scene is as fresh as vibrant as it has ever been. Do go try some of these great games, and give feedback to the devs after their hard work.